:"This is the article on the movie. For other interpretations, see ." 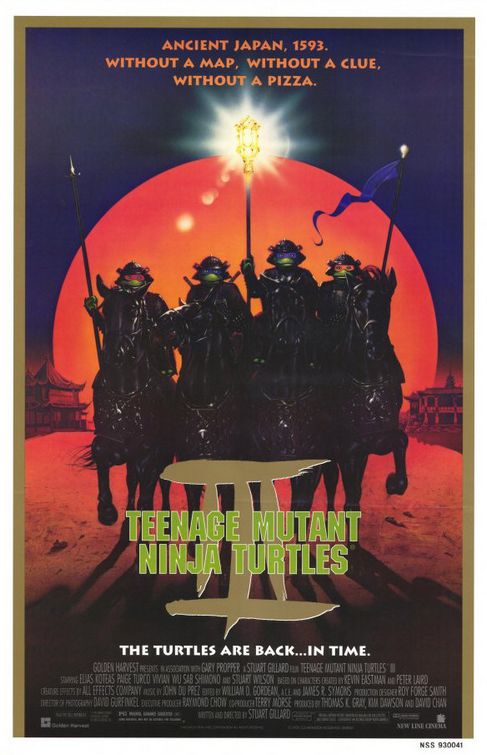 Full and wide-screen version DVDs were released on , . The packaging for both the and identifies them as "America's favorite s," which is a mistake as s are s.

In feudal , a man is seen fighting on back a group of , who capture him.

In the twentieth century, the perform a sequence, wherein each shows his fighting style, in the abandoned subway station which they have made their home. As the dance ends, Raphael throws a "sai" into the speaker, frustrated that no one appreciates the Turtles or sees what they do. He is contradicted by the arrival of April O'Neil, who has been shopping at a in preparation for her upcoming vacation and brings her friends gifts to cheer them. Michelangelo is given a colorful , Donatello is given an old , Leonardo is given a on historical s and Raphael is to receive a hat. Having stormed off earlier, he is never formally given it.

For Splinter, April brings an ancient Japanese . This is possibly a reference to the "Sacred Sands of Time Scepter" featured in the original Eastman and Laird's Teenage Mutant Ninja Turtles comic series and the crossover story featuring Dave Sim's "" character.

In feudal Japan, the man who was taken, Kenshin, is reproached for committing disgrace by his father, Norinaga. Angry at the latter, Kenshin leaves his father's presence and drives priests out of a temple. There, he finds the same scepter and reads the inscription on its handle: "Open Wide the Gates of ". Before Kenshin leaves, a British weapons-trader called Walker is introduced, along with his Niles.

In the twentieth century, April is looking at the scepter when it begins to emit light and a small device inside its lamp-like crown begins to spin. She is then sent to Kenshin's time and place, and he to hers, exchanging clothes. Upon arrival, April is captured by the Daimyo's soldiers. Lord Norinaga, blaming her for Kenshin's disappearance, imprisons her.

The Turtles become friends with Kenshin and decide to travel back in time to retrieve April. They invite Casey Jones to watch over Splinter, then embark, warned by Donatello's calculation that they have only 60 hours wherein to complete the rescue before the scepter ceases to enable . Having been sent to Japan in exchange for Daimyo Norinaga's Honor Guards, the Turtles arrive mounted on s in the midst of a battle. Michelangelo, who is sitting backward on his horse, is separated from his brothers and captured by outlaws. The scepter goes with him and is ultimately seized by an unseen character. The other Turtles search for April. When they reach Norinaga's fortress, presumably by infilitrating his army, they are quickly mistaken for Honor Guards, though they escape from the prospect of facing the Daimyo. They then follow Walker's men to the prison and discover April.There, the Turtles drive out Walker's assistants, intimidate the jailer, and free April. They leave through a garbage-disposal chute and leave. Escaping behind them is an Englishman called Whit, who is said to have rebelled against Walker.

In 20th-century New York, Kenshin is becoming impatient and worried. To placate them, Casey introduces him, and the Honor Guards, to . However, this plan comically goes awry when the Guards believe that hockey consists of players beating one another.

An attack on the Turtles, who were again mistaken for the Honor Guards, leads them to Mitsu, leader of the rebellion against Lord Norinaga. Mitsu is a young, beautiful, courageous, and determined woman who intends first to overthrow the Daimyo and later to marry Kenshin so as to prevent another . It is she who has imprisoned Michelangelo. Mitsu's village is under attack by Walker and his men, who are searching for the scepter; therefore the Turtles rush to intervene. Michelangelo is released by two of Walker's men, who think to earn a reward by restoring one of the Honor Guards confirmed as absent. Having seen his face and heard him speak, they plant the rumor among their partners that a is in the vicinity. When confronted by Michelangelo, the other Turtles, and Mitsu's people, Walker flees. Michelangelo saves a boy named Yoshi from a , whereupon Leonardo revives the nearly dead child by means of , for which the grateful villagers allow them to stay. Anguished by the loss of the scepter, the Turtles commission a local to make a new one.

Walker uses the presence of the Turtles as an excuse to raise the price of s sold by him to the Daimyo, arguing that the threat posed is greater by demons than only by men. Norinaga, during the same conversation, reveals a legend stating that four "kappa" resembling the Turtles, had vanquished his ancestors, and suggests that they have returned to disgrace him. Although he initially refuses to pay more for the guns than the price originally set, he agrees later. Walker shows himself, in these interactions, to be greedy, manipulative, and without compassion.

Michelangelo tries to teach the village cooks to make , but produces an inedible result. In a later scene, it is shown that he is apparently attracted emotionally to Mitsu; he learns that she wishes to marry Kenshin and reassures her that Kenshin will return when the Turtles have departed. Raphael, meanwhile, fulfills his potential patience and gentleness through the child Yoshi, whose name links him through an unclear means to Splinter's . He becomes very fond of this child and eventually considers him a younger brother.

A new scepter is completed, only to be broken by Michelangelo and Raphael during an argument over whether or not to stay. Mitsu then informs them that Lord Norinaga has guns and will attack the next day. Yoshi, fearing Raphael's death, gives him the original scepter, which he (having apparently been its unseen captor earlier in the film) had hidden under the house where he lives. They are overjoyed to see it, but resent Mitsu for concealing it in order to force them to fight in the war. Mitsu is then kidnapped by Whit, who takes Mitsu and the scepter to Walker.

The Turtles set out to rescue Mitsu. In the process, they learn of the legend that has caused the Daimyo to fear them, regain confidence in themselves, and free many of those imprisoned, leading to a massive battle in the courtyard of Norinaga's between the rebels and the daimyo's army. Leonardo defeats Lord Norinaga in a sword , comically finishing him by cutting his hair (a disgrace to his status as a samurai), and then trapping him inside of a bell.

Walker, at the end of the battle captures April and threatens to kill her. His soldiers then take control of the battlefield, armed with guns. He orders the Turtles to be shot, whereupon Leonardo bluffs by drawing upon the belief (held insistently by Walker's superstitious men) that he and his brothers are demons, saying that any bullets shot at them will ricochet and kill their senders. Baited by Leonardo to shoot himself, Walker shoots at them with a , but misses when the Turtles instinctively pull their heads into their shells. April and Whit, also targeted by the cannon (Whit having spoken against Walker's order), duck their own heads to dodge the shot. The cannonball collides with the bell, freeing the shocked but largely unscathed Daimyo.

Walker's soldiers are routed and he himself runs away. He obtains the scepter and a cage containing pet birds from his room, then climbs over the roof of the palace to a high point overlooking the ocean. He is there cornered by the Turtles. To distract them while escaping himself, Walker throws the scepter overhead and begins climbing down a scaffold. The Turtles form a chain with their bodies, holding onto a wall or fence at one end and catching the scepter at the other. Walker, realizing that he has forgotten his birds, returns to retrieve them, whereupon Whit, realizing that his name is "lower than scum" in the eyes of the desirable April, uses a to kill Walker by knocking him to his death in the ocean. Oddly enough, the film does not show him colliding with the water, but merely shows him vanishing to the accompaniment of a sound effect representing a splash.

The Turtles then debate whether or not to go home, wishing to remain on grounds that they are appreciated and respected in feudal Japan, unlike 20th-century New York City where they must hide underground to avoid being targets of human xenophobia. Mitsu urges them to go, so that she may have Kenshin return to her, and makes a parting well-wish to Michelangelo, of whose soft spot for her she is aware and by which she is flattered. The scepter then activates, making their decision urgent. In New York City of the late twentieth century, Kenshin has activated it in his impatience to go home. Splinter counsels him not to abandon the Honor Guards, on the grounds that such an act would be cowardly. Casey gathers the Honor Guards, who have become infatuated with the trappings of their host , and organizes their return to feudal Japan.

The Turtles ultimately decide to go home, based on the argument that their presence interferes negatively with the lives of the people of feudal Japan. Raphael bids Yoshi an affectionate farewell. As a result of his procrastination, Michelangelo fails to join April and his brothers. When they have returned to their native time, the Honor Guard who had replaced Michelangelo runs away, carrying the scepter. As he exits the Turtles' den, the scepter activates, exchanging him for Michelangelo. Simultaneously, its powers of time travel (symbolized by the rotating device at its head) are destroyed. In Japan, Norinaga is taken prisoner and brought before Mitsu and Kenshin. He is surprised to see them both together, and more surprised to see his Honor Guard walk through the corridor, half naked and talking incoherently about s. When he has gone, having spoken no word but clearly shown his submission, Kenshin seizes Mitsu in imitation of a poster he had seen in the Turtles' home and kisses her on the lips. Norinaga, presumably is reconciliated with his son.

Michelangelo, perhaps thinking on the preceding scene, is depressed until Splinter puts the afore-mentioned lampshade on his (Splinter's) head as a joke, whereupon both laugh. The film ends with another dance sequence.

Rist and Tochi (who did the voices of Michaelangelo and Leonardo, respectively) are the only two voice actors to voice the same character throughout all three live-action TMNT movies. However, Feldman voiced Donatello in both this sequel and the first movie.

According to creator Lloyd Kaufman in his book "Everything I Learned About Filmmaking, I Learned From the ", New Line did not live up to their end of the contract to make a "" movie. Kaufman has speculated that New Line bought the rights because they were in negotiations to make the sequels to the Teenage Mutant Ninja Turtles movie and wanted to use the "Toxic Crusaders" film as leverage against the owners of the rights to TMNT. Troma sued New Line and was awarded an undisclosed amount in damages.