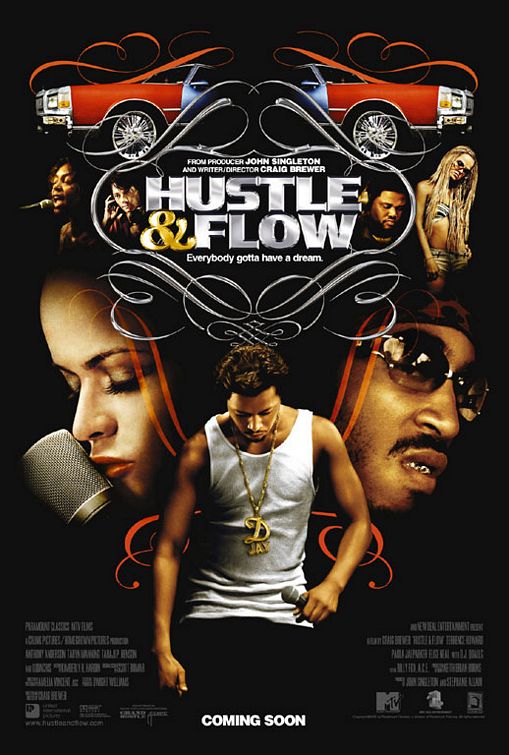 "Hustle & Flow" is a 2005 film written and directed by about a Memphis hustler called DJay, played by , who aspires to become a rapper.

The film was nominated for two for Best Actor for Howard and won an , for 's "".

DJay is a petty drug dealer and a with three in his charge, but he is dissatisfied with his life. After acquiring a keyboard and meeting an old friend from school, Key, who has become a sound technician, DJay decides to try making songs. Key and his friend Shelby help DJay put together a hit song. DJay proves to have a real talent for lyrics, in which he expresses the frustrations of a small-time hustler struggling to survive.

The group experiences many setbacks throughout the creative process. DJay must hustle those around him in order to procure proper equipment and recording time. Key's relationship with his wife becomes strained, while DJay throws out one of his prostitutes for ridiculing his enterprise. The group eventually records several tracks, including "" and their primary single "", on which DJay's pregnant prostitute Shug provides backing vocals. DJay begins to develop a romantic connection with Shug after their recording.

DJay's friend Arnel informs him that Skinny Black, a successful Memphis rapper, will be returning to the neighborhood for a party. DJay gains admittance to the party under the pretext of providing , with the intention of giving Skinny Black his demo tape. Black is dismissive at first, but after a long night DJay successfully hustles him into taking the tape. Before leaving the party, however, DJay discovers that the drunken Black has destroyed his tape. In a rage, DJay assaults Black and shoots one of his entourage in the arm before fleeing.

DJay is arrested, but in prison he learns that his prostitute Nola has hustled the local radio disc jockeys into playing his songs, which have become local hits. The end of the film, in a bit of irony, sees a duo of prison guards who have their own rap group asking DJay to listen to their demo, much as DJay had approached Skinny Black. After the guards request DJay to listen to the demo, he accepts their tape and responds with the following: "You know what they say, everybody gotta have a dream," which was the slogan for the film.

*Terrence Howard originally turned down the role of DJay because he was trying to get away from being cast as a pimp, but he later signed on to play the role after recognizing the complexity of the character.
*As concepts of both hustle and flow are unique to African American culture, it turned out to be nearly impossible to find proper translations for international release of the film. For example, the Russian translation of the title means "The fuss and the torrent".