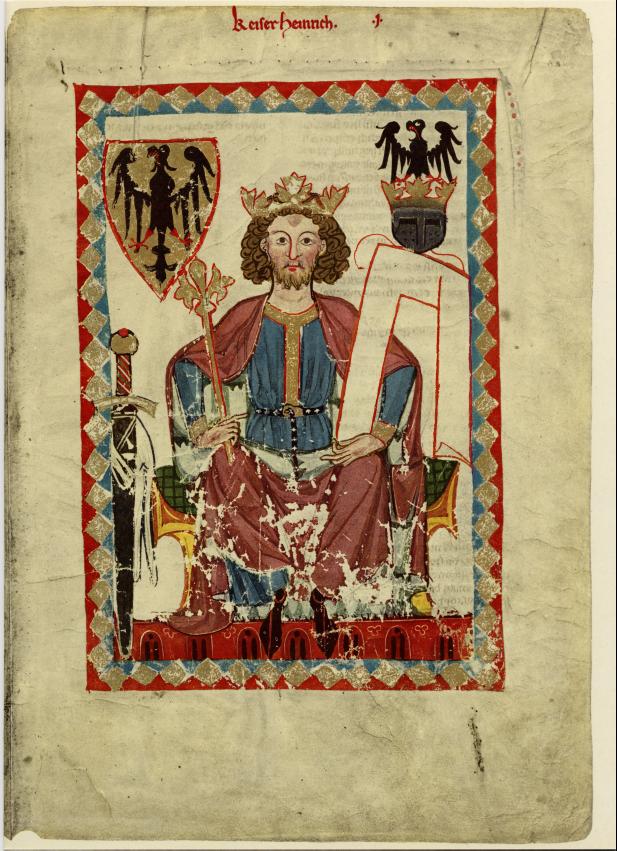 Born in , Henry was the son of the emperor and Beatrix of Burgundy, and was crowned at in June 1169, at the age of four. After having taken the reins of the Empire from his father, who had gone on the Crusade, in 1189-1190 he suppressed a revolt by , former duke of Saxony and and relative of Frederick.

was betrothed to Henry in 1184, and they were married on , . Constance was the sole legitimate heir of , and, after the latter's death in November 1189, Henry had the possibility of adding the Sicilian crown to the imperial one, as his father had died crossing the in , now part of June 10, 1190.

In April 1191, in , Henry and Constance were crowned Emperor and Empress by . The crown of Sicily, however, was harder to gain, as the barons of southern Italy had chosen a grandson of , Tancred, count of , as their king. Henry began his work besieging Naples, but he had to return to Germany (where had revolted again) after his army had been heavily hit by an epidemic. Constance, who stayed behind in the palace at Salerno, was betrayed by the Salernitans, handed over to Tancred, and only released on the intervention of Celestine III, who in return recognized Tancred as King of Sicily. Henry had a stroke of fortune when the duke of Leopold gave him his prisoner, the King of England Richard I, whom he kept in . Henry managed to exact from the English a ransom of 150,000 silver marks, a huge sum for that age, and with this money, he could raise a powerful army to conquer southern Italy.

Henry was granted free passage in Northern Italy, signing with the Italian communes a treaty in January 1194. The following April he also reached a settlement with Henry the Lion. In February Tancred died, leaving as heir a young boy, William III. Henry met little resistance and entered , capital city of the Kingdom of Sicily, on , and was crowned on . He is also said to have had the young William blinded and castrated, while many Sicilian nobles were burned alive. Some, however, like the Siculo-Greek , transitioned into the new Hohenstaufen government with ease.

At that point, Henry was the most powerful monarch in the Mediterranean and Europe, since the Kingdom of Sicily added to his personal and Imperial revenues an income without parallel in Europe. Henry felt strong enough to send home the n and Genoese ships without giving their governments the promised concessions in Southern Italy, and even received tribute from the . In 1194 his son, Frederick, the future emperor and king of Sicily and Jerusalem, was born. Henry secured his position in Italy, naming his friend as Duke of and giving the to .

His next aim was to make the imperial crown hereditary. At the Diet of , held in April 1196, he managed to convince the majority of the princes to vote for his proposal, but in the following one at (October 1196) he did not achieve the same favourable result.

In 1197 the tyrannical power of the foreign King in Italy spurred a revolt, especially in southern Sicily, where Arabs were the majority of the population, which his German soldiers suppressed mercilessly. In the same year Henry prepared for a , but, on , he died of in Messina. [In 1197, although “the well-prepared crusade of Emperor Henry VI aimed at winning the Holy Land, it also aimed at attaining the ancient goal of Norm [an] policy in the E [ast] : the conquest of the Byz [antine] Empire.” See Werner Hilgemann and Hermann Kinder, "The Anchor Atlas of World History, Volume I: From the Stone Age to the Eve of the French Revolution", trans. Ernest A. Menze (New York: Anchor Books, Doubleday, 1974), 153; “Henry pressed territorial and political claims against Constantinople, demanding territories the Normans had held in 1185 and using a remote family connection to pose as the avenger of the deposed emperor Isaac II. . . . even Pope Innocent III was frightened by the German emperor’s claims of world domination. As events turned out, however, Henry died suddenly in 1197 before he could carry out his plans for eastward expansion.” See Timothy E. Gregory, "A History of Byzantium" (Malden: Blackwell Publishing, 2005), 273.]

His son Frederick II was to inherit both the Kingdom of Sicily and the Emperor crown.

Henry was fluent in and, according to , was "distinguished by gifts of knowledge, wreathed in flowers of eloquence, and learned in canon and Roman law". He was a patron of poets and poetry, and he almost certainly composed the song "Kaiser Heinrich", now among the Weingarten Song Manuscripts.

According to his rank and with Imperial Eagle, regalia, and a scroll, he is the first and foremost to be portrayed in the famous , a fourteenth century manuscript showing 140 reputed poets (see ), and at least three poems are attributed to a young and romantically minded Henry VI. In one of those he describes a romance which makes him forget all his earthly power, and neither riches nor royal dignity can outweigh his yearning for that lady ("ê ich mich ir verzige, ich verzige mich ê der krône" – before I give her up, I’d rather give up the crown).

*. He was related to every other king of Germany.