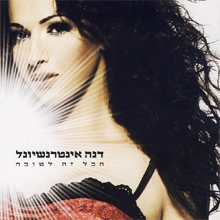 "Hakol Ze Letova" (Hebrew: הכל זה לטובה, "It's All For The Best") is the eighth and latest studio album by singer , released on by Hed Arzi label with the catalogue number 64726.

Dana came back in March 2007 with her new single release, "Hakol Ze Letova." She signed onto the Hed Artzi label, her official website was given a full makeover, and stunning new promotional photos of Dana popped up in magazines and newspapers. Along with performing "Hakol Ze Letova" on Israel's Rokdím im Kokhavím (Dancing With the Stars), Dana performed live at several events. "Hakol Ze Letova" received admirable airplay, but Dana's next single, "Love Boy," was a smash summer hit. Released in June, "Love Boy" quickly hit the top of the charts and the great music video was released soon after. Dana stopped by The Yair Lapid Show, the number one talk show in Israel, in June to chat and perform. She also gave a fantastic performance at Israel's Pride Party that same month. In August, it was announced that "Love Boy" had broken an Israeli radio record. [http://www.lunaestas.com/dana/hzl.php]

The album includes five single releases, the title track "Hakol Ze Letova", "Love Boy", "At Muhana", "Seret Hodi", a duet featuring and "Yom Huledet". The album adds two remixes as bonus tracks as well as two videos, one for the biggest hit "Love Boy" and the other for the French language non-album single "Lola".

"Hakol Ze Letova" was Dana International's first release for the record company Hed Arzi, incidentally the same label as one of her greatest childhood idols, the late .

Note: the English translations of the song titles do not appear on the album cover and are given here for informational purposes only.