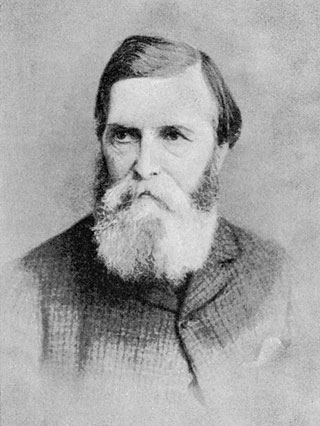 Born Robert Michael Ballantyne in , he was part of a famous family of printers and . At the age of 16 he went to and was six years in the service of the . He returned to in 1847, and published his first book the following year, "Hudson's Bay": or, "Life in the Wilds of North America". For some time he was employed by Messrs Constable, the publishers, but in 1856 he gave up business for the profession of , and began the series of stories for the young with which his name is popularly associated.

His stories had the merit of being thoroughly healthy in tone and possessed considerable graphic force. Ballantyne was also an accomplished , and exhibited some of his at the . He lived in later years at Harrow, and died in , , where he had gone to attempt to shake off the results of overwork. He wrote a volume of "Personal Reminiscences of Book Making" (1893).

"It is seldom that one meets a man who has not, in his youth, read at least one of Ballantyne's adventure tales. To most of the Fathers and Grandfathers of today, there must still cling around the name of this nineteenth-century author the golden fragrance of the coral islands of their youth..."

When Eric Quayle, author of [http://www.ballantynethebrave.com/index.php Ballantyne the Brave] , penned these words thirty years ago, the works of R.M. Ballantyne were still known to the men of that generation. Today, if you were to ask the typical man on the street if he had heard of the Christian author of 19th century boys' literature, less than one out of a thousand could respond positively.

Who was Robert Michael Ballantyne (1825-1894)? He was truly his father's son. Born into a family of literature, Robert was the son of newspaper editor and printer Sandy Ballantyne. Robert was also the nephew of the printer for Scotland's most famous literary author, . Robert grew up in and around the home of Sir Walter Scott, and one can only imagine the influence this relationship had on the future author of boys' literature.

Some bad financial investments made by Scott and Sandy Ballantyne would cause the family's ruin and Ballantyne's life would be changed forever.

From the age of 16 to 22, Robert was hired to work in Canada by the Hudson's Bay Company. There he would trade with the local Indians and trappers in some of the most remote regions described as "the wilds of Canada". He would later base his book Snowflakes and Sunbeams on his adventures.

His longing for family and home impressed him to start writing letters to his mother. This was the beginning of a long love of writing. Ballantyne would later recall in his Personal Reminiscences of Book Making, "To this long-letter writing I attribute whatever small amount of facility in composition I may have acquired."

In 1847 he returned to Scotland to find out that his father was dead. The news was devastating, but he would press on, and in the year 1857 he published his first great work, "The Coral Island". Nevertheless, because of one mistake he had made in The Coral Island, Ballantyne would travel all over the world to gain first-hand knowledge of his subject matter and to research the backgrounds of his stories. For example, he served for a while as a fireman while researching Fighting the Flames. For his great book "Deep Down" he spent time with the miners of .

Ballantyne felt that the old saying "boys will be boys" was not correct. Instead, he believed that boys must trained up from boys to be true men and not just left on their own "to be boys". He said:

"Boys [should be] inured from childhood to trifling risks and slight dangers of every possible description, such as tumbling into ponds and off of trees, etc., in order to strengthen their nervous system.... They ought to practice leaping off heights into deep water. They ought never to hesitate to cross a stream over a narrow unsafe plank for fear of a ducking. They ought never to decline to climb up a tree, to pull fruit merely because there is a possibility of their falling off and breaking their necks. I firmly believe that boys were intended to encounter all kinds of risks, in order to prepare them to meet and grapple with risks and dangers incident to man's career with cool, cautious self-possession... -R.M. Ballantyne, The Gorilla Hunters

R.M. Ballantyne also believed in firm manly friendships in boys. He knew how important it is for boys to have good wholesome friends. In almost all his books, he sets his characters around other young men or even older men who speak into their lives.

Ballantyne had few important friendships when he was a boy, so understood all the more just how important they were. Some people have criticized him for his Scottish Covenanter/ Reformation and perspective on life. Others have complained about his so-called "" found in all his books. But rather than being points of criticism, it is Ballantyne's strong theology which sets him apart from so many other authors. Ballantyne had an excellent mix of humour, adventure, and true in his books.

During his life he would write over 80 books. In 1866 he married Jane Dickson Grant. They had four sons and two daughters. Ballantyne died in Rome, Italy, on February 8, 1894.

One of the young men directly touched by Ballantyne was . This young man was so impressed with the story of "The Coral Island" that he would later base portions of his famous book on themes found in Ballantyne. In fact, he honored Ballantyne in the introduction to "Treasure Island" with the following poem:

To the Hesitating Purchaser

If sailor tales to sailor tunes,
Storm and adventure, heat and cold,
If schooners, islands, and maroons,
And buccaneers, and buried gold,
And all the old romance, retold
Exactly in the ancient way,
Can please, as me they pleased of old,
The wiser youngsters of today:

So be it, and fall on! If not,
If studious youth no longer crave,
His ancient appetites forgot,
Kingston, or Ballantyne the brave,
Or Cooper of the wood and wave:
So be it, also! And may I
And all my pirates share the grave
Where these and their creations lie!

Stevenson was the one to give Ballantyne the sticking title of " Ballantyne The Brave", and what a perfectly fitting name!

Ballantyne's influence on hundreds of thousands of boys should not be underestimated. He opened to an entire generation stories of adventure, global travel, and faith in a way unsurpassed by any author of that era. Furthermore, Ballantyne set an example for boys of the 19th century to go out and hunt wild animals, conquer castles, and explore the .

He became the boys' hero. They wanted to be like "their good friend Mr. Ballantyne". His books made an inestimable contribution to the success of Christian , , , future leaders, adventurers, and the itself. 21st century boys who open Ballantyne will be benefited by learning about a world in which honorable men should act like men, and where is the sovereign ruler of the universe.

On the Slave Trade

“In writing this book [Black Ivory] , my aim has been to give a true picture in outline of the Slave-Trade as it exists at the present time on the east coast of Africa. In order to do this, I have selected from the most trust-worthy sources what I believe to be the most telling points of ‘the trade,’ and have woven these together into a tale, the warp of which is composed of thick cords of fact; the woof of slight lines of fiction, just sufficient to hold the fabric together. Exaggeration has been easily avoided, because—as Dr. Livingstone says in regard to the slave-trade — ‘exaggeration is impossible.’

I began my tale in the hope that I might produce something to interest the young (perchance, also, the old) in a most momentous case—the total abolition of the African slave-trade. I close it with the prayer that God may make it a tooth in the file which shall eventually cut the chain of slavery, and set the black man free.” —R. M. Ballantyne