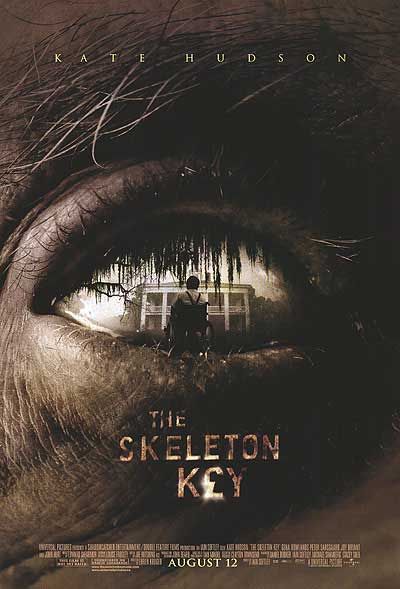 "The Skeleton Key" is a horror-suspense film released in the UK on and in the on . It is set in and has a cast led by , , and in an original screenplay by , directed by .

Caroline Ellis (played by ) is a hospital aide from Hoboken, , who, after her latest patient sadly dies much to her disapproval, quits her unsatisfying nursing job in the city and takes a position as a private hospice caregiver at an isolated house deep in the of southern Louisiana's eerie, enchanting Terrebonne Parish. The lady of the house, Violet Deveraux (played by ) is a diffident, old-fashioned Southern matron in need of help for her husband Ben (played by ), a severely disabled victim who is expected to die soon.

Violet gives Caroline a skeleton key to open every room in the house, and Caroline soon finds the mansion has a dark past. Finding her way into a secret room in the attic, Caroline discovers hoodoo dolls, a book of spells, potion jars, and other macabre instruments of black magic. Violet tells Caroline that the room belonged to two black servants who had worked at the house in the 1920s. Mama Cecile () and her husband, Papa Justify () were, in their day, renowned practitioners of hoodoo, a form of Afro-Caribbean folk magic. But to their white employers, they were nothing more than servants, and Justify and Cecile were lynched when it was discovered that they were performing spells with the children of the house owners. Caroline dismisses Violet's fear of Justify and Cecile's ghosts dwelling in the house as , but more strange events occur, piquing her curiosity about the obscure (to her) swamp religions and their relationship to the physical condition of Ben, whom she has become determined to save and restore to health.

Caroline, after realizing that Violet is working harmful spells on Ben, seeks the help of the young lawyer Luke Marshall (played by ) hired to rewrite Violet and Ben's wills. While in Luke's house, Caroline discovers clues leading to the revelation that Luke is in fact assisting Violet. Just as Caroline is about to act, Luke captures her, ties her up and gags her and takes her back to the manor.

Caroline is held captive, but manages to get free and "rig" (roughly, enchant) the house with brick dust, which is said to keep away those who mean one harm. After breaking Violet's legs by pushing her down the stairs, Caroline snatches from Violet a piece of paper upon which is written a spell of protection and forms a protective circle around herself. Violet comes into the ritual room, and explains that "they" have been waiting for her to believe. Caroline tries to deny the fact that she now believes in hoodoo, but cannot convince herself.

Violet pushes a mirror at Caroline, which contains the image, initially of the little girl, then of the Violet and ultimately of Mama Cecile. The mirror smashes into Caroline, knocking her unconscious. Caroline then wakes up and walks over to Violet, who is barely awake. She takes Violet's cigarettes, and begins to smoke, while she utters the words "Thank you, child," revealing to the audience that the soul of Mama Cecile is now inside Caroline's body. The mirror acted as a portal, and transferred Mama Cecile's soul into Caroline's body, while placing Caroline's soul in Violet's body. Luke walks in, and it is revealed that he too is not who he claims to be. His body is possessed by the soul of Papa Justify. Ben, who was previously the host to Papa Justify's soul, is revealed to be the real Luke.

Mama Cecile (in Caroline's body) gives Caroline (in Violet's body) a liquid which causes a . This prevents her from talking, so that she can't reveal the presences of Mama Cecile and Papa Justify. The film ends with "stroke" victims Violet and Ben in an ambulance looking at each other and Caroline realizing she and Luke are trapped in Violet's and Ben's bodies. The final chapter is that "Ben" and "Violet" left the house to "Caroline", thus leaving Mama Cecile and Papa Justify to continue occupying the house.

It can be inferred that in the 1920s, the pair used hoodoo to transfer their souls to Martin and Grace, the children of the home's owner, leaving the real children to die in the lynched bodies of Justify and Cecile. In 1962, the pair once again transfer their souls from the aging bodies of the children to Ben and Violet, a couple looking to buy the home. Once Ben and Violet's bodies too became old, they performed their ritual once more on Luke and Caroline. Thus, Mama Cecile and Papa Justify have occupied the house in various forms since the 1920s.

The setting in reality

The movie was filmed at the historic , actually located on the in , not the coastal, swampy . At the end of the movie, the aerial shot of the house and its grounds was actually done with CGI technology. In that shot, the house and the grove of trees surrounding it are real, but the swamp that seems to be on the verge of engulfing the house was created by the director for the movie. Behind the house actually lie hundreds of acres of fields. In reality, the house is not really run down; it was decorated with ivy, among other things, to set the tone.

The 78 RPM record "The conjure of sacrifice", that played a key role in the film, was later remixed by the British DJ into an song titled "The Conjure". Sections of the incantation from the film can be heard in the song.

In late 2007, it was announced that Universal Pictures will be releasing a sequel to the movie in early 2009. Iain Softley has currently signed on to direct, while stars like Kate Hudson are unknown. Nothing on the plot has been announced thus far, but inside sources say that Caroline might get revenge in the sequel.

As of 2008, it is rumored that Ehren Kruger, writer of the first Skeleton Key, will sign on for the second script.

The character Violet uses an IMCO lighter several times in the film. IMCO is one of the oldest lighter manufacturers in the world, if not the oldest.